Roger Bullivant Limited (RB) was contracted to design and install piles for part of the refurbishment of the historic Majestic building in Leeds. The derelict, fire-ravaged building was to be revamped to create a high-end, glass fronted development of new offices and restaurants.

Built as a cinema in the 1920s, The Majestic was more recently used as a bingo hall, and then a nightclub, before suffering a devastating fire in September 2014.

Since then a new temporary roof and ventilation system has been installed to safeguard the external fabric of the building.

Rushbond Director Mark Finch said: “The Majestic is a much loved Leeds building, widely held in affection, with some great memories and nostalgic moments for so many.

“The fire was a truly sad and devastating episode in the building’s life and traumatic for all those involved. Our focus is now on making the building once again majestic; so that it can truly contribute to the future economic prosperity of the city, through viable and sustainable uses.

The total refurbishment would create a 65,000 sq ft office development, along with leisure and cafe spaces, within a restored structure and a new roof.

The piling works were carried out in the building’s basement using a restricted access piling rig craned into the building. The piles were installed to prop up the new retaining wall and glass façade to the front of the building. 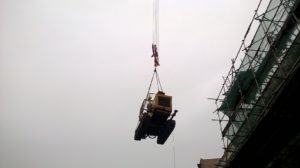 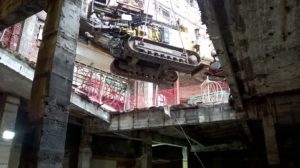 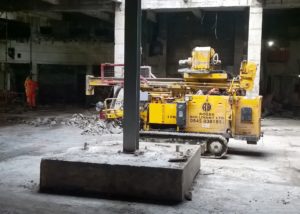 RB successfully installed a combined 138no sectional flight auger (SFA) piles through weak mudstones and siltstone, to resist loadings of 1000kN max axial compressive loadings in conjunction with tension and shear loadings. All piles were installed inside the basement to found three different structural elements used inside the new building.

Phase Two – RB then went on to install 54No 300mm diameter piles which were to be used to support a new retaining wall around the perimeter of the basement. The aim was to construct a new retaining wall which was to overlap the 100 year old existing basement walls and to hold up the new glass façade.

Welcoming the rebirth of an important city building, Councillor Judith Blake, Leader of Leeds City Council, said: “The Majestic is an iconic landmark in the very heart of Leeds and is held in affection by many people in our city. I’m really pleased to see these exciting new plans taking shape.

“This distinctive and high-quality development will attract international interest. Leeds city centre continues to thrive, with major schemes like this demonstrating a high level of confidence in the city’s growing economy and our ambitions for the future.” 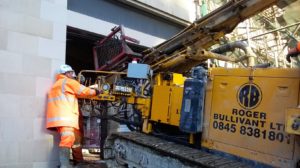 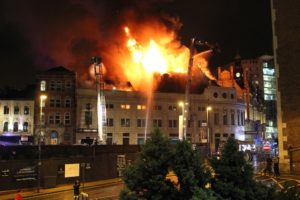